Vaccines Could Have Stopped These Outbreaks (MAP)

Want to know how the anti-vaccine movement has affected preventable outbreaks? Check out this fascinating map illustrating vaccine-preventable outbreaks.
Created by the Council on Foreign Relations, the graphic shows all of the world’s outbreaks from 2006 to today that could have been prevented by recommended vaccinations. The map, which is interactive on the CFR website, allows users to search outbreaks by year, location, number of victims and type of illness. 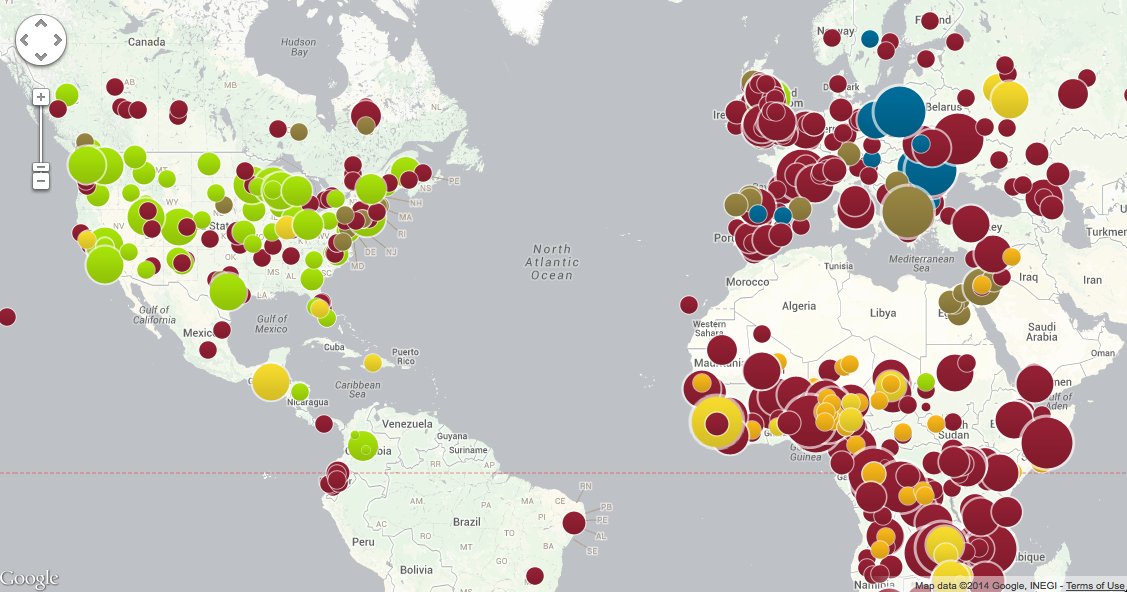 Each dot on the map represents at least one case of a vaccine-preventable disease, with larger dots representing hundreds or even thousands of cases. Cases of the measles are represented by red dots, the mumps by brown dots, rubella by blue, polio by gold, whooping cough by bright green and everything else by bright yellow.

The map clearly shows the problems developed regions have in controlling these types of outbreaks, particularly in western and southern Africa, where epidemics like measles and cholera are extremely problematic. India, Pakistan, Indonesia and the Philippines, in turn, have been hit hard by measles epidemics of their own.

More surprising to some, however, may be the outbreaks in the developed world. Measles is prevalent in both Britain and the U.S., despite the availability of the MMR (measles, mumps and rubella) vaccine, reports the Los Angeles Times.

And it’s not just measles. The Verge notes that when it comes to whooping cough, the United States had astronomically more reported cases than its less-developed peers, including Afghanistan and the Sudan. The state of Wisconsin recorded 7,000 cases of whooping cough between 2011 and 2013, while California had more than 10,000 cases.

In the case of the California outbreak, which killed 10, at least one study concluded nonmedical vaccination exemptions may have been one of the “several factors in the 2010 California pertussis [whooping cough] resurgence.”

These preventable epidemics are “an artifact of the anti-vaccination movement, which has associated the vaccine with autism,” the LA Times’ Michael Hiltzik wrote. “That connection, promoted by the discredited British physician Andrew Wakefield and the starlet Jenny McCarthy, has been thoroughly debunked. But its effects live on, as the [CFR] map shows.”

Indeed, Jenny McCarthy has for years claimed that autism is tied to vaccinations, an assertion that is not backed up by conventional medicine. Despite the best efforts of anti-vaccine advocates like McCarthy, the medical community is very clear in its support for childhood vaccinations.

On its website, the Mayo Clinic emphatically rejects any connection between vaccinations and developmental disorders:

Vaccines do not cause autism. Despite much controversy on the topic, researchers haven’t found a connection between autism and childhood vaccines. In fact, the original study that ignited the debate years ago has been retracted.

About the Author: Carl Ulbrich