PHOENIX, AZ – Celebrating 25 years of advocating for the health of all Arizonans, The Arizona Partnership for Immunization (TAPI) honored 76 individuals, organizations, and initiatives during the 2017 Arizona Big Shots awards dinner at the Phoenix Country Club. Arizona Governor Doug Ducey proclaimed the week of April 16 to 22 as “National Infant Immunization Week in Arizona.”

Jim McPherson, a board member of TAPI since the organization’s inception in 1992, served as Master of Ceremonies. Presenting the awards were Debbie McCune Davis, executive director of TAPI ; A.D. Jacobson, MD, board chair of TAPI; Cara Christ, MD, Arizona Department of Health Services Director; Diana Gomez, president of the Arizona Local Health Officials Association; and John Pope, MD, president of the Arizona Chapter of the American Academy of Pediatrics.

Keynote speaker was Allen Craig, MD, Deputy Director for the National Center for Immunization and Respiratory Diseases at the U.S. Centers for Disease Control and Prevention (CDC) in Atlanta, GA.

Long Shot David Landrith Award for Advocacy: Legislation, regulation, or public policy that has helped reduce the barriers to immunizations to improve the ability to account for the immunizations of Arizona’s population. This award is presented in memory of David Landrith, long-time public policy vice president for the Arizona Medical Association, who passed away in 2014.

Spot Shots: Outstanding media coverage to educate the public about the value of immunization as a preventive health strategy.

Up Shots: Individuals or organizations new to the immunization effort, but show a commitment to improving the health and wellness of Arizonans. This award is presented in memory of Andrea Fadok, a young and energetic immunization advocate who was killed in a car accident in the summer of 2000.

Hot Shots: Going beyond the call of duty to the cause of increasing immunizations.

Recipient of the fourth annual U.S. Centers for Disease Control and Prevention (CDC) Immunization Champion Award for the state of Arizona is Jim McPherson, whose skills as a communicator and his extensive experience in partnerships and public affairs have made him a respected voice for childhood vaccinations in Arizona. For over 20 years, McPherson has helped to build unique partnerships and coalitions while advocating to protect Arizona’s children through vaccination.

In addition, 48 healthcare practices that achieved a minimum 90 percent coverage level of their two-year-old patients (4 DTaP, 3 Polio, 1 MMR, 3 Hib, 3 Hep B, and 1 Varicella) and teen patients (1 Tdap and 1 MCV4) received the Daniel T. Cloud Outstanding Practice Award. A pediatric surgeon by profession, Dr. Cloud served as Chief of Surgery at Arizona Crippled Children’s Hospital and Chief of Staff at Good Samaritan Hospital. In 1981, he was elected to a one-year term as president of the American Medical Association. He served as TAPI’s board chair since its inception in 1993 until his death in 2010.

The Arizona Partnership for Immunization (TAPI) is a non-profit statewide coalition of over 400 members. TAPI was formed in response to the alarming fact that in 1993, only 43 percent of Arizona’s two-year-olds were fully immunized against preventable childhood diseases like measles, mumps, polio, and whooping cough. Through the efforts of TAPI’s partners in the public and private sectors, immunization coverage rates in Arizona have improved dramatically, with

72.3 percent of children fully immunized by age two. Unfortunately, the problem never ends. Each year in Arizona almost 90,000 babies are born, and none arrive immunized. For more information, visitwww.whyimmunize.org. 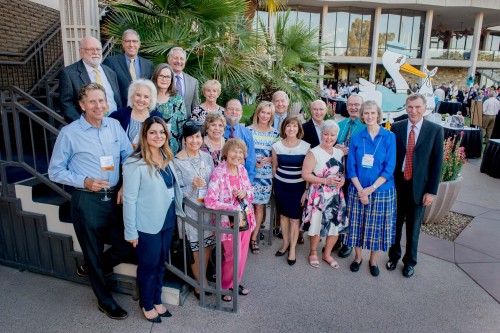 About the Author: Carl Ulbrich